PR companies generate a lot of really good photography from media launches to product launch shots.  Normally they are only distributed to the media and remain on file server until someone requests them which is a shame given the relatively high expense of them.  This is a legacy from the days when prints were ordered and with each print costing up to 20 euro, executives were reluctant to order what was not going to be reprinted.  Things have changed greatly since then:

1. Most photographers will give unlimited usage of the images and supply them on disk following an asignment.

2. Social media has created a wealth of new platforms to get extra value and better visual understanding of an organisation or the product.

At the most basic level photos should be uploaded to the company website – ideally in a format where they can be downloaded.  Social media sites like Flickr and Pix.ie should also be optimised especially if you have developed a community there.  Facebook, bebo and blogs can really be enhanced by including these images in posts and updates.

To date these images are also mainly 2D static images and give little interactivity or ability to see from multiple angles.  Now you can produce 3D images for free using Photosynth which is technology developed by Microsoft (disclosure they are also a client).  In their own words it “allows you to take a bunch of photos of the same scene or object and automagically stitch them all together into one big interactive 3D viewing experience that you can share with anyone on the web.”

Photosynth gives the ability to reconstruct the scene or object from a bunch of flat photographs.  The free webbased technology examines images for similarities to each other and uses that information to estimate the shape of the subject and the vantage point each photo was taken from. With this information, it recreates the space and uses it as a canvas to display and navigate through the photos.

In essence you take a bunch of photos (20+) of the scene walking through or around it, upload them to the site (you need to set up a profile but simple enough) and then the technology does the rest.

You are left with an image similar to below: 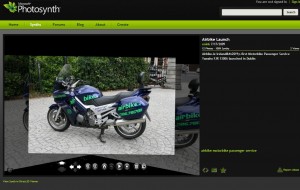 Photos taken at the launch of airbike.ie showing their range of Yamaha FJR 1300A motorcycles.

From this you can navagate left, right, upwards or downwards depending on the range of photos you inserted.  You can include the link on a varity of different mediums.

This is one we did for the launch of Airbike showing its Yamaha FJR 1399A motorcycles that they will use to deliver a motorbike passenger service.

How Photosynth is used in communications is very open.  Image you are trying to walk people through a building/hotel/leisure centre or allow them to see a new car from different angles.  Normally this would have involved complicated website building technology.

Once you have created the synth why not include in press release material, blog, email signatures and social media platforms from Twitter (shorten the url) to Facebook.  What I really like about it is that people can choose the angle and the level of interactivity it allows.

The video below gives a good run through the technology.