When Google Goggles was announced some time ago it was not available in Ireland and my phone did not support it, so I promptly forgot about it.  I upgraded the phone a while ago but only stumbled on Google Goggles when playing around with Google Mobile on the iPhone.
In few short words it is described as an application that ‘uses pictures to search the web’.  All you need to do is take a photo of an object using the camera phone.  The application scans the image, looking for key identifiable information such a logos, places, landmarks, artwork, wine and contact information.  It then returns some search results based upon this analysis.  I imagine this list will eventually cover anything that might have a stored, tagged images online or in a searchable database.  It is all very early stage for the service but processing power, content and proliferation of smart phone would appear to the key overcomeable problems stopping it from being incredibly powerful.

Still even at this stage there are some lessions to be had from it and likely SEO issues.

Here is a quick example. 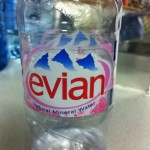 Once in the application I took a photo of an empty Evian bottle in my kitchen. 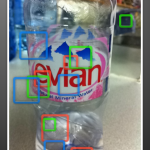 This is how it looks as the application scoured the image for something identifiable.  This stage only took a few seconds as the boxes floated up the image as a visualisation of it scanning for something recogniseable. 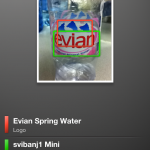 The results are pretty basic but it did recognise the logo, name of company and service and who it represented.

I clicked on the Evian logo result. 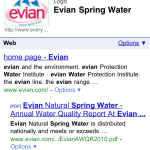 Interestingly the top result was not the Evian website but looks like another who registered an image as evian logo.

To me this and voice activated searches looks like a serious contender to typed searches especially in situations where you are looking at something visual and text just does not work.  The ability to identify a building and its history by simply taking a photo or finding out the name and background to a painting in seconds is something that could be almost impossible with text alone.  These are the popular uses that have been well discussed but there could be lots of marketing applications.  Think  about some really interesting competitions or posters that bring people to additional sites for more information.  As Facebook, Flickr, Pix.ie, Instagram have all shown people are often happier to take and share photos than  utilise text.

The bigger more immediate challenge will be optimising sites, images logos, company premises photos and key personnel so that when a customer does a Google Goggles picture search that there is a good library of comparison images and optimised text.  As the Evian example shows you need to thing about how Google Goggles will display and analysise images in order to optimise organic searches.  I would imagine there are lots of tagged images on their site but perhaps none or few that are tagged Evian logo.

The service is still fairly rudamentary but I can see that changing rapidly.  The results are way off or fairly basic.  It does recognise faces but the matching results seem almost random but similar to iPhoto Faces with better processing power combined with intelligent intuitive software then the abilty to identify someone from a photo and get psychological insights from an analysis of their social channel usage could be a few clicks away.  A wonderful service or scary invasion of privacy but looks like its arrival is not far away.

My other experience with testing Google Goggles was more personal.  I took a photo of a Peppa Pig DVD which brought me to Peppa Pig You Tube videos.  I am now plagued with hourly requests by my daughter to play episodes of the programme she has never seen before.  Very odd to see a 2 year old holding an iPhone in a tree house glued to a TV cartoon but thats the world of instantly accessible information, on any device, in any place whenever they want it, that they will grow up with.

Is the Gadget reading the alt text of the images to find them or does the search work in some other new way.

I think so but I also think it may be the file name.