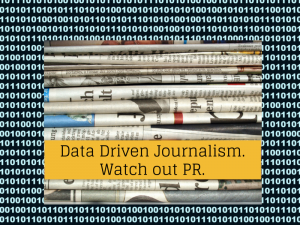 The formal launch of the Irish Times data section last week unveils an interesting emerging picture in the world of data driven journalism. Social media and Twitter in particular have been very fertile grounds for journalists but the pure volume of data is a mixed blessing. Lots of new information but the sheer amount of it can be hard to handle.

This is where the data journalists step in.

Over the last year Irish media outlets like the Irish Times and the Irish Independent have been rapidly recruiting graduates and researchers from the Insight Centre. Some of these have done very interesting semantic analysis on elections for Irish online news sites in the past so its not hard to see their usefulness to the traditional media industry.

The first wave of data driven journalism is likely to involve crunching of large scale data sets to produce some nice tidy news and feature stories/infographics. This will probably be followed by long tail focused articles that hit very select niches and probably seem out of place with the normal selection of articles.

This development and the increasing appearance of infographics, video, audio and other content forms are to be welcomed.

However I have some nagging dimmed alarm bells ringing in the deep recesses of my brain when I think about some potential directions these developments could go.

Ever since the sacking of the award winning Washington Post political journalist Dan Froomkin due to poor website site traffic figures in 2009, the potential for algorithm and data driven decision making taking over from journalist gut feel has been pretty clear.

This will all have a big impact on the PR industry. On one side new content forms are good but if algorithms were to utilised to decide if something was covered or not – this is bad news.

Take this small example of what currently happens every day.

PR executive phones journalist to pitch story. They have a well oiled pitch, customised to the papers profile, they know its in the journalist interest area and they have a friendly relationship – all good practice. Journalist listens to the pitch, visualises the articles, does a mental run through of pitching it to the editor and if he trusts the source and has enough autonomy to make a decision then its green light.

PR executive repeats process. Journalist puts the article pitch into the news algorithm cruncher. This checks for similar stories or companys name, checks the amount of web traffic it generated, the amount of social sharing, the influence of the company, the likely readership of the piece, the ad potential and produces a report to say this article is not commercially viable.

Journalist says the machine said no.

How do you argue against data?

I love the insights that data can give but really hope these developments do not see the human element being removed.

Journalist and PR companies utilising and crunching data is nothing new but now the tools are much more sophisticated, the news environment is much more competitive, investment in journalists has dropped and the rush to get stories out first has increased.

As new business models emerge I imagine they will introduce new challenges and opportunities.  Take the above example with a publicly accessible tool that could scan a PR pitch to see if it was likely to be accepted by an editorial team – could save a lot of time and effort for both sides.

Watch this space for a lot of disruption.