So its all about the money. Top 2015 Predictions.

February 25, 2015
eoink
Events, Online PR, Uncategorized
No Comments on So its all about the money. Top 2015 Predictions.

Ever since organic reach within Facebook plunged to near zero content marketeers have advocated media spend to get any sort of visibility within the platform.  However what Sean is advocating is that you need to allocate budget to pretty much all content.  It show how blurred the lines have become from the days when ‘Paid’ media were interruption promotional ads, ‘Owned” was organically rich and discoverable interesting content you seeded and ‘Earned’ was pure editorial you worked for with good content.  As interruption based marketing becomes increasingly filtered and blocked its no surprise there has been a rush to content based marketing.  Good content will always do reasonably well but needs patience and rule of thumb figures quote 5X effort per piece of content in terms of promoting it.  Sean quoted a 50% (of budget) media spend allocation for videos.  Gone are the days when creating good quality content was the hardest part – the journey is only beginning then.  This really impacts brands on these platforms rather than publishers who are treated kinder by the algorithms but its not unusual for journalists to have a modest budget to help promote stories.  Some Irish companies read these signs well in the early days such as PropelAd  who had a scientific/algorithm driven approach to selecting content that had the attributes of virality which they boosted with the Facebook ad engine.  Earned media is not immune either with services like Outbrain and Taboola further blurring the lines with their offer of ‘surfacing’ earned content on news sites.

This all led to some interesting discussion with Oisin Browne from the CityBin company who felt that social should remain social with great content and bought media on the platforms focused on revenue generating activities.  Expect lots of judgement calls but with the platforms calling the shots the choice might be limited.

In general this is all good news for the agencies and possibly in particular PR agencies who never really managed to get any of the media spend pie allocation.  If they can continue to be the creators of good content and clients accept the need to back it up with decent media spent it is going to be very disruptive in the PR/Advertising industry.  The ad industry will not let go easily and in fairness there is a very specialised skill set in media buying that few in PR possess.  However the ease of running ads and promoting content through these networks has become so user friendly that the barriers to entry are very low.

Sean called out Twitter cards as one particular area to watch this year and there are lots of really good deployments visible daily on Twitter.  For a nice introduction see RazorSocial’s tutorial.

Sean’s talk mainly looks at the trends for 2015 which is always a tough ask and risky.  My personal favourite was the rise of the new Bebo which is his favourite social network, so brace yourself for more platforms to get your head around and manage.  There were also some nice pointers on the need to have a good multi media mix in posts with photo updates scoring lowest on unique organic impressions.  Video scored the highest and the need for a coherent video strategy was well made. 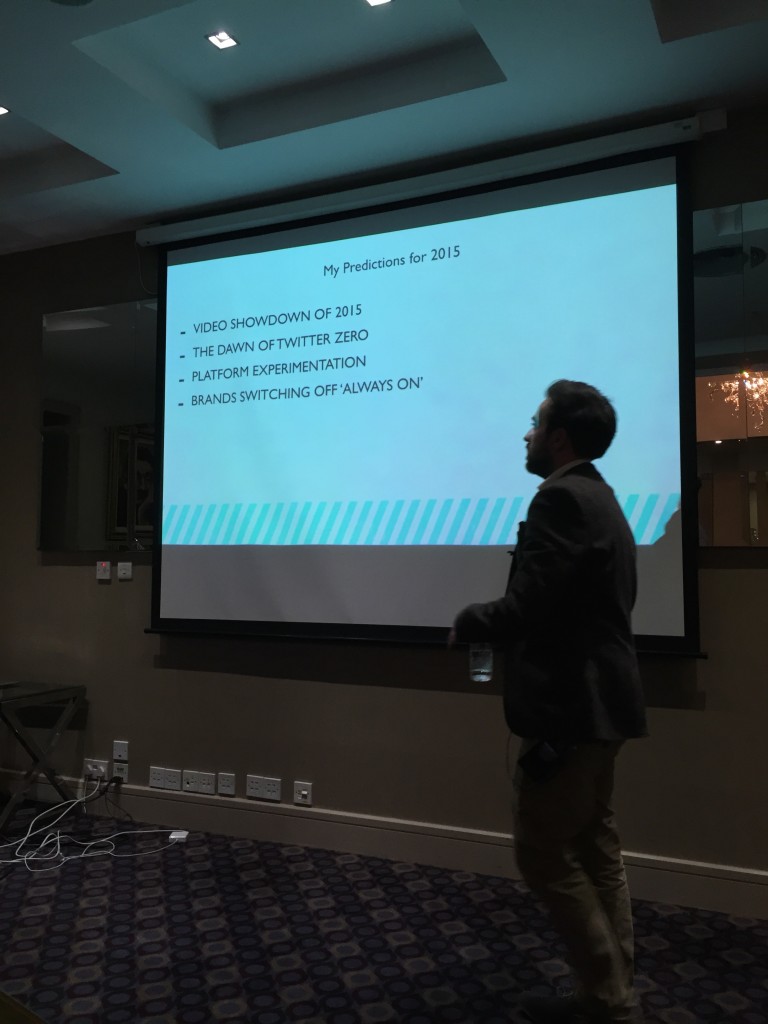 Some of the other trends discussed are below but lots to digest.