Its good to get out of your bubble.

April 6, 2010
eoink
Education, social networking, Uncategorized
1 Comment on Its good to get out of your bubble.
Social media and how different age groups view it can be very personal.  In fact too personal and often you make decisions based upon how you view it rather than how others use it.  Research can help overcome this short coming but talking to and seeing how students use it really brings it home.
In light of this I had the pleasure to judge some submissions made by cert, diploma and degree business course students from the Dublin Business School.  The students were given a project brief from Repak on helping to communicate recycling to different age groups (focusing on the 18-24 segment) and to give an overview of their website properties.

8 groups presented their findings and the calibre was extremely high for students who have very little marketing training.  In addition there was a strong balance of overseas students for whom English was not their first language.  Some of the big takeaways were:

Overall there was a real sence of ease and familarlity with digital content especially video and how they are linked to social media.  This is the space they all use on a daily basis and generating content for them was not seen as a major jump.  They were all very comfortable with the background technical areas like hosting, editing etc and production was fairly seamless.

Here is one of the videos one of the groups produced, based on how you recycle – i.e. with your hands.

The presentations themselves were very well delivered with some groups really going a stage further in terms of the hadn out materials. Below is one folder that one group did up which had a very ecofriendly feels to it and took time to prepare. 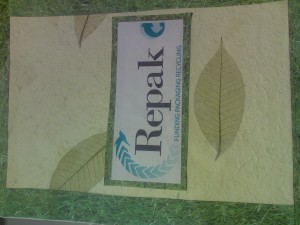 In summary lots of relevant video that entertains and links to their lives with plenty of reasons to return.
Plenty to ponder!
Many thanks to Angela OhUiginn, DBS, Rob Reid, Cybercom, Darrell Crowe and Laura Byrne from Repak.
Tags: DBS, judging, Repak, Social Media, students,

[…] Via Eoin. Some great presos on recycling campaign ideas. […]