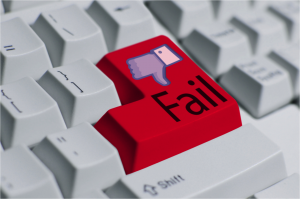 Social media crisis are all the rage.  Nothing drives sharing faster through the social-verse than a company or individual falling flat on their face.

The shock for most companies is the speed that it unfolds, the paralytic effect it has on their ability to respond and their ill ease with the different platforms.

There is no magic bullet for sorting out a social media crisis but a mixture of common sense, advance planning, keeping emotions in check and understanding the arena can help a lot.

In the next few posts I will look at the different facets of a social media crisis from its attributes through to what you can do while in the middle of a crisis.

First up lets have a look at its characteristics.

Attributes of a Social Media Crisis.

A social media crisis is different to a traditional crisis and its worth considering some of the different attributes to get a better understanding. The Ogilvy 360°Digital Influence gives a nice analysis of these including:

1.     Speed: Things happen extraordinarily fast in the social universe.  What previously might have taken days or weeks to build up, now happens in hours with the crowd moving on promptly to the next big thing, leaving behind the hard earned reputation of a company in tatters. The mauling can also be very intense and the digital foot print is resilient.

2.     Transparency: Don Tapscott in his book Grown Up Digital outlines how the digital native generation intensely scrutinizes things that a company says and does.  He points out that integrity of a company is key and that they are likely to dig deeper that any generation before.  Now instead of merely dealing in a war of words you have an entire army of online forensic experts testing and watching your actions.  If something is being covered up they will probably find and share it.

3.     Engagement: Social media has always thrived on dialogue and companies responding directly to users.  This is a curse and blessing in a social crisis.  Companies not geared up to respond will suffer as not only is there an expectation of more detailed responses and unending answering of questions but the timeline is severely shortened.  This poses lots of challenges from basic resources to legal restrictions to revealing of information.

4.     Search: Think about how the story unfolds and how people find the content.  From the originators who first publish it, it moves to sharing of the story through social media, then on to the online news sites and ends up in editorial sections within 24 hours.  Most of these stories will be on authorative sites like news websites and feature very high in search.  For most people search is still key, especially if they are trying to verify the legitimacy of a story.  Its also resides here for long periods after the event, even if an attempt has been made to remove the original content.

5.     Tools: Many companies run into trouble by not understanding the nature of the platforms where a crisis might originate or is spreading. This ranges from basic understanding of the site anatomy to sensitivity to underlying values and norms.  In the traditional world of crisis management and particularly in dealing with the traditional media, most companies had the upper hand in that they understood how news happens, had unparalleled access to journalists and knew what was likely to happen.  In the world of social media you are most likely at a disadvantage in that the community understands these tools, the catalysts, have the contacts and are able to produce content in a variety of mediums in rapid speed.

6.     Media: It would be a mistake to undervalue the impact that traditional media has on social media crisis.  As social media is still relatively new even relatively mundane online spats can become main stream news if they gather enough momentum online.   The first wave of this is through the online news sites which are regarded as authorative by search engines.  As this initial flurry of activity dies down the commentary and analysis sections in the traditional channels can reignite the fire and bring an entirely new audience into the loop.  Even the amplification through a media outlets’ Twitter profile or Facebook page can have a big impact as these profiles (both individual and central accounts) have a higher than normal influencer ranking.

7.     Civility:  There is much debate about whether civility is on the wane with the growth social media.  Regardless, the reality is that the perceived anonymity of the internet can result in knee jerk commentary and pronouncements that previously would have been restricted to water cooler/pub conversations.  Now as they appear online can provoke a pack like savaging or trolling behaviour.  Although they are treated the same, online comments can be very removed from a persons real opinions or beliefs.

8. Sharing.  The ease of sharing and spreading a story or link has dropped to the level that people don’t even realise they are amplifying a story.  A single click can often be enough to share a story from anywhere online to a social media network and vague interest can now appear like determined stance.

Social media crisis can be the sole stage for a crisis or act as another channel for a crisis that originated elsewhere.  Understanding the characteristics can help reconfigure how a company can start to plan and build response mechanism.

Social crisis can take many shapes and forms.  In the next post I will look at some of the different type Irish and international crisis and what sparked them off.