Facebook places has been running in Ireland for a week today and I do like it, but I also think it will cause people to review who are their friends on Facebook.

Most people have modest numbers of friends on Facebook but still probably more than Dunbars 150 .  This is a theoretical number but its widely recognised that many peoples friends on Facebook have very tenuous links to real friendship.  This has happened for lots of reasons but generally people randomly accepted friend requests as they arrived and never really queried them.  I think the first few weeks of Facebook Places will see people rethink who they have in their friends list.

With Foursquare the pool of friends was fairly small and generally people were quite careful about signing in at home.  Normally people would manipulate the map to show their house in a different area.   The profile of people using Foursquare is very different to the vast number of people on Facebook.  Foursquare also started from the premise of sharing your location with people and hence you entered with eyes wide open. Facebook did not have this beginning so its a new phenomenon and so likely to be disruptive.

Withìn the first week of Facebook places I have been surprised by the amount of people who have checked in at home.  Perhaps they don’t care or don’t realise that this gives a pin point location of where they live and for the very curious what their houses look like with street view.

I am personally not comfortable with Facebook or many friends having that sort of intimate detail.  One of the things I have also noticed is that I am getting much more responses from people verbally and via email, text and Facebook itself, commentin on where I have checked in.  Some of this is curiosity with a new tool and will become as invisible as other wall posts over time. 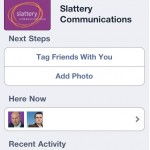 However I think that as people get notes and approaches from friends showing not only that they know what they have done but where they are, that people will start to cull people who they acquired as friends but with whom they do not wish to share every movement.  There is of course a more sinister aspect with potential stalking.  Afterall if someone is your friend surely they can pop around to see you at home!

I have not drilled too deeply but some thoughts on Facebook places to date.

So far I like Facebook Places and can see lots of potential for businesses but really interested to see the next wave of iterations.  I think this will really drive a wave of creative uses of this tool.  Expect to see some nice money making angle from Facebook from deals to sponsorships.
Tags: Facebook Friends, Facebook places, Foursquare, Geolocation, Social Media,