In preparation for a presentation I am giving at Hotel Website Marketing next week I pulled together a list of Irish media on Twitter and used Klout to some insight into their rankings/influence.  The results were surprising.  The landscape is fairly scattered with individual journalist/media personalities tweeting (some under unusual twitter handles) and some publications/programmes running their own twitter streams.  I expected some of the individual journalists to score high, which they did, but what was surprising was the influence that the generic twitter profiles were getting. 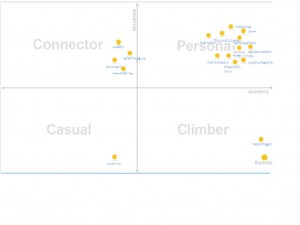 Initially I thought most would fall into the climber category with low influence but high following as most started using their breaking news or equivalent and did not follow many people.  However a good proportion of them scored high in the persona category showing that they are interacting more with the community and that it appears they are being actively managed.

Another interesting observation was that even as I was plotting people their scores where changing rapidly.   Marie Boran from Silicon Republic moved from the connector category to the persona category over the course of a few days.  The list is not a complete list but Rick O’Shea scored highest on the ones I had.  Klout could not find quite a few of the profiles. 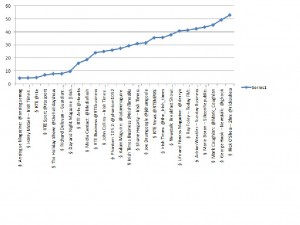 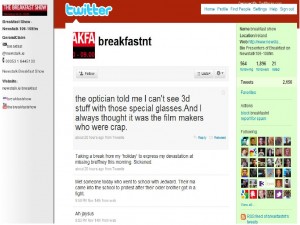 Looking at the Newstalk profile alone you get a sense of how active they are.  2,156 tweets, 1,896 followers and following 564 people.  The tweets are a variety of ones from the show and some regular observation/news tweets.  They also respond to other peoples tweets and have a reasonable engagement level.

Overall this picture shows that most Irish media have moved from using Twitter as a purely broadcast tool and are engaging more than ever.  This has a lot of implications for the PR industry and is a very positive trend.  I imagine a lot of stories that end up on the clipplings floor might make their way on to the Twitter streams, something that a lot of companies could be missing out on.  The rule for engaging via Twitter are still evolving but a good starting point is to make sure you are following them.  A sudden influx of DMs and @ comments pointing to press releases would be pretty unwelcome.  I also imagine that the media publications are watching each others activity and that it could get pretty competitive.

Many thanks to Alexia Golez whose list I used as a starting point.  I am sure I have missed plenty but its a good starting point for media people that PR practitioners should probably be following.  The list is below.  Let me know of one that I have ommitted.

I use Klout for this exercise but another new tool on the block is the TweetLevel from Edelman.  Some scores differ but give some useful insights.  Both are good for setting bench marks against others and provide a useful roadmap for increasing influence.

Hi Eoin, Interesting post and observations. I find Twitter a great source for interesting articles and contributors. I did find however, that I believed I needed to set up different accounts for my publications to avoid confusion amongst friends and followers. For Life and Fitness Magazine I set up @LifeFitnessMag for updates on fitness and health as not everybody would be interested in those (although they should be :)). I then Retweet some of those from @derryo so people know what hat I’m wearing so to speak. Similarly, for the Tipp Tatler magazine, I set up @TippTatler to promote Tipperary related tweets and local news, which again may not be of interest to everyone. It can get confusing at times. I’m quite happy to receive press releases provided they are newsworthy and of relevance to the readers of the different publications.

Thanks Derry. Multiple twitter accounts work bet but keeping track of them all can soak up a lot of time. Twitter rules and norms are been written as the platform evolves. Big changes in RT this week and lists last week.