Nice use of QR Codes

I had an issue a while ago trying to view a QR code on a business card I received but an interesting discussion on the For Immediate Release podcast and an invite I received to the adgrad Winner of the RTE copywriting competition (it was awarded yesterday at an event in DIT Aungiers Street) prompted me to look at it again.

QR codes (or quick response codes) are basically an image like a bar code that scanners and QR codes applications on camera phones can interpret.  Once you scan it (I used a free QRcodereader on iTunes) you are brought to an online space (website, email address, social media) where you can find out more information.

Most current uses that I can see of QR codes are to make it easier to find web addresses especially ones with long urls but there are load of potential applications.  QR codes are already being used by the Irish media on news paper such as the Metro Herald with the DRG group and Social Media.ie did a nice post on some extra uses. Now that smart phones are reaching critical mass and as the creative industries start to deploy them we will see lots more applications.  One nice one could be virtual/real treasure hunt where people need to find QR code on a posters that bring them to another location until someone find the prize.   Here is an example of one in New York.  Either way another nice one for the toolkit.

You need to generate a QR code first but there is useful guide available on QRcodes.ie.  Here is one for this blog

(Edit on 17th June). When you start to look for something, you see it everywhere.  Nice offer of generating a QR code from Worky that can be used on a business card.

(Edit 28 June) Digital Times ran an interesting piece on the inclusion of QR codes in the Food Lovers Guide to Ireland.

Bought some grapes yesterday and was very pleasantly surprised to find that the QR code brought me to a video on recipes and ideas on preparing grapes. 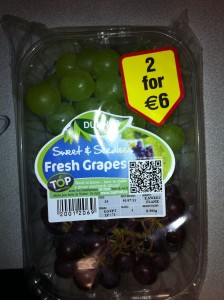 (Edit 30 June). Went to the Bloggers International event last night in Portlaoise and spotted another nice use of QR codes.  Great event and nice video link ups with the UK.   As usual I alway pick up some gems at these type meet up.  As part of the event they invited some people to do elevator pitches that they recorded.  One of the companies who pitched held up a print out of a QR code for their website.  Simple and clever.  Will post the video once its available.

(Edit 1 July ) Nice article today by John Kennedy in Silicon Republic and QR codes.  Had never really thought about supermarkets using the QR codes to sell the ingredients for meals.  You scan a big QR code at store entrance that gives you list of ingredients for a meal, directions on where to find them and video of how to cook them.

(Edit 6th July)  these edits could go on for a while.  Really interesting use of QR codes by Tesco in South Korea where they printed large print outs of their shelves at train stations where people could scan and order food using the printed codes.

(edit 25th July) Previous focus has been on what people do with their QR codes i.e. simple point to a website or some creative execution of it.  Now according to Mashable, “a 30% tolerance in readability” means people can be much more creative in desiging the QR codes themselves.

This is the invite from the DIT students and congrats for being so inventive.

Irish company where you can create QR Codes to link to virtually anything online – with colour and analytics – http://www.codacast.com