October 30, 2009
eoink
Online Reputation Management, ORM, Twitter
No Comments on How much klout do you have on twitter? 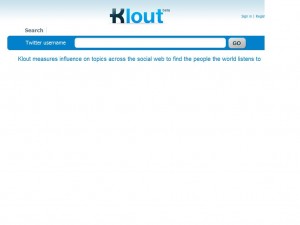 How you compare with others on twitter has normally been a manual task of looking at their followers, following, number of tweets, number of @ and general level of engagement.  I did an analysis of some public sector organisations for a presentation to some press offices organised by Public Affairs Ireland and trying to decipher who was more influential was pretty time consuming and manual.  This tool really helps giving a helpful snap shot.  Unfortunately it does not find all twitter users but assume this will improve over time.  When you search under your twitter user name it positions you on an x/y axis looking at influence and audience with the four quadrants covering Casual, Connector, Climber and Personal.  The personal quatrant containing the most active twitter users. 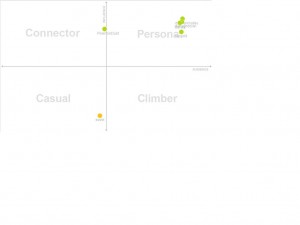 Interestingly I was in the bottom corner and much as I would like to protest its probably a fair reflection on my personal twitter usage and out reach.  I don’t follow everyone who follows me and I do engage with a relatively small pool of people on a regular occasion and I have a moderate rate of tweets.

It also give a text interpretation of the graph.  Mine is below and although I dont agree with it all – ahem! – its indicative.  Interesting to see youself reflected lower than you would expect as in theory everyone would like to be the utimate category but why and how people use twitter is a personal choice on time availability, how much engagement you want and can handle and how wide you wish to be spread among others.

“You don’t take this Twitter stuff too seriously. People towards the lower left corner are probably very new to social media. Most people in this quadrant tend to engage with a small group of friends that they know in real life. If you’re in the upper right corner, you have succeeded in building a strong audience, but need to engage and be more active to jump to the next level.”

I would like to see all the variables they use but its a useful snap shot when you are looking at improving your twitter profile or trying to get a handle on someone elses influence.

Did George Hook Cause the Twitter Numbers to Jump? May 7, 2009
The Business case for Social Media November 18, 2008
Using Social Networks to Help You Network February 10, 2012